Shank shape and action
When people look at a curb bit most of the time the first thing to make an impression is the mouth piece, then the shank length. Now, with the influx of specialty bits and disciplines that require a horse to be more upright and slowed down into artificial movement, shanks have developed that no longer work like a standard shank.
The original concept of a curb bit was a simple lever, or pry bar style. You lifted one end up, the mouthpiece was the fulcrum, and the purchase rotated forward. The length of the lever arm determined the leverage. With the mouthpiece as the fulcrum the movement was fluid and directional toward the line of leverage. You could trace it from the top of the poll, through the purchase, mouthpiece, rein ring, up the reins to the hand. There was no loss of energy or force because it’s a direct line.

A pry bar action curb is not dictated by the shape of the shank. As long as the purchase is directly over the cannons and the lower shanks also lines up below the cannons then it doesn’t matter where the shank goes, because the mouthpiece remains the fulcrum. This is why the action of a kimberwicke, grazing bit, straight shank or cavalry shank is basically the same. Pull the rein, the bit rotates, mouth, poll and curb pressure. Of course severity is affected by the length of the shank and the type of mouthpiece, but the action remains the same.

Unfortunately newer shank styles are favoring the crowbar style of shank, which creates an entirely new action, that is higher leverage and much more severe. It’s not just a decorative shank style, it actually changes the dynamics of the bit. The lifter style of bits have crowbar action. Whether long shanked or short shanked they work the same way. With a crowbar style bit the purchase becomes the fulcrum and the mouthpiece is the dropped part of the lever. This increases force tremendously. It’s the difference between trying to pull a nail with a straight bar or with a crowbar. We all know which is better.

Lifter action occurs when the shank of the bit comes in at the cannons or above the cannons. This changes the action. A lifter bit generally has a higher purchase and the shank is curved in such a manner that it drops down into the cannons. The bit hangs down and as the reins are pulled the rotation occurs at the purchase first, then the cannons dig back and slightly up into the mouth. As pressure increases the cannons push into the tongue even harder and move higher in the mouth. It doesn’t matter how tight or loose the curb strap is, this is the action. We tested it with one finger, two fingers and three fingers between the jaw and curbstrap and even though the shank was tethered it did not decrease the action in the mouth, in fact the standard curb length of two fingers created the worst action as it allowed the bit to dig in and wad up the tongue and push it back in the mouth. If the bit has a jointed mouthpiece the pinching action is going to be extreme. The high pressure created, even with a minimal amount of pull, punishes the tongue and down onto the bars.
On a standard curb you take the height of the purchase, divide it into the total shank length to get your purchase to shank ratio  and then you can calculate the amount of pressure the bit will create in the mouth.  The standard curb bit has a 1½" cheek and a 4½" lower shank, thus producing a 1:3 ratio of cheek to lower shank, a 1:4 ratio of cheek to full shank, thus producing 3 lbs of pressure on the chin groove and 4 lbs of pressure on the horse's mouth for every 1 lb placed on the reins. With a lifter bit you calculate differently. The measuring doesn’t stop at the purchase, it stops at the drop to the mouthpiece. So you go up the shank to the top of the purchase and back down to the drop where the cannons are. You calculate in the purchase measurement and then the entire shank to the drop becomes the total shank measurement. So a lift bit may look like a 7 inch long shank from purchase to rein ring, but when you add in the drop it becomes a 10 inch bit that has that amount of leverage. You use the same principal for measuring how much leverage a crowbar can produce, except instead of pulling up a nail, you’re driving the mouthpiece back into the tongue. 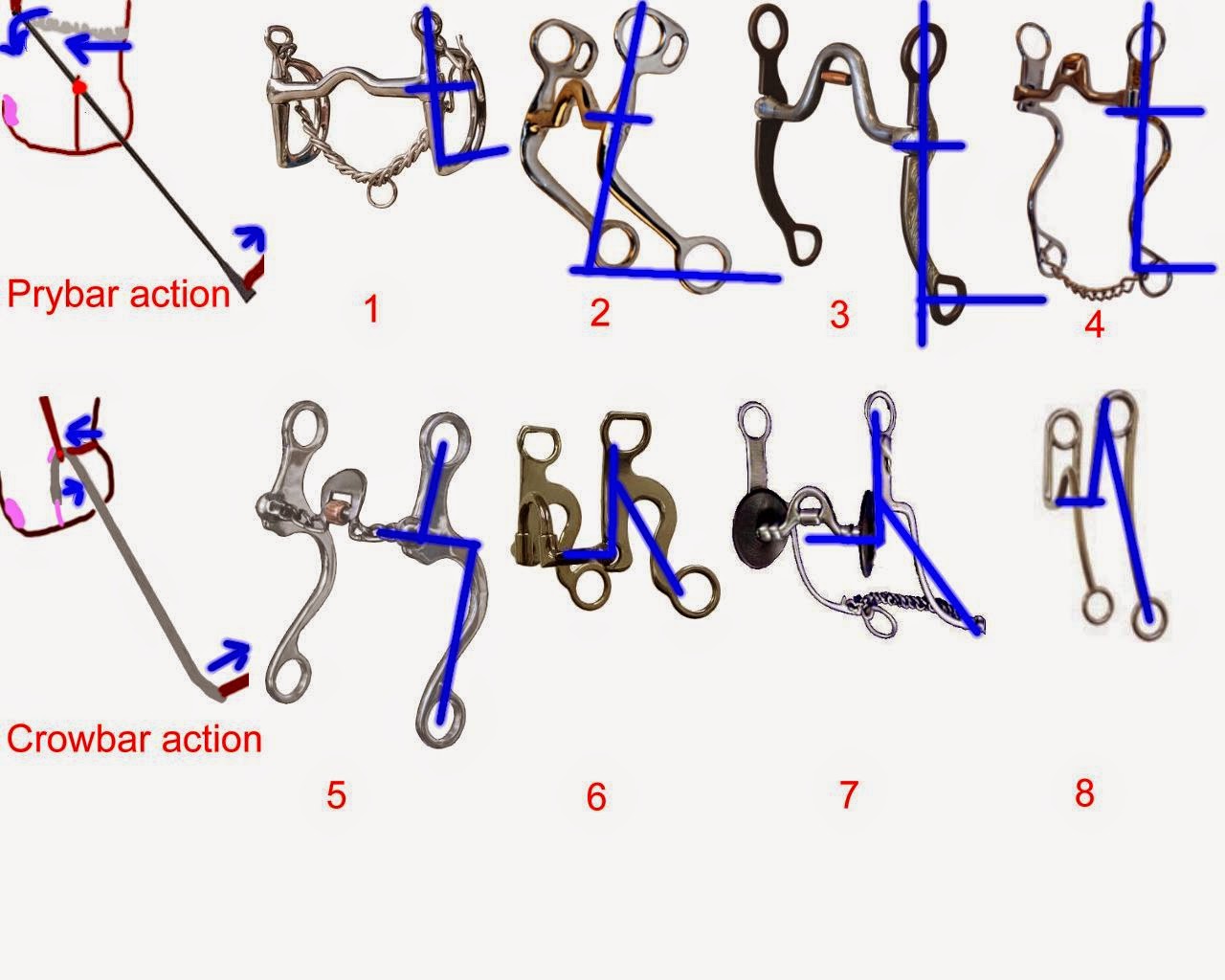 Analysis; Don't use it.
If you are interested in learning more about bits please join us on Facebook at
Horses: Proper Bits and Bitting techniques

Posted by Trinity Appaloosa Farm at 8:03 PM No comments: